Congratulations to David Baldock, whose name was drawn from among the correct entries to the Norfolk County Sports Hall of Recognition’s trivia contest held November 1 to December 31, 2022.

For his winning entry, David receives a $25 gift certificate for David’s Restaurant.

Thank you to all entrants, and to David’s Restaurant for donating the contest prize.

The Barrel’s Pizza Promotion event resulted in a $300 donation to the Sports Hall. Many thanks to The Barrel, and to all those who supported this event.

Many thanks to The Barrel Restaurant for their Pizza Promotion. The Barrel pledged to donate $2 to the Sports Hall for every medium and large traditional or gourmet pizza ordered for pickup or delivery from November 7 to 13.

The pizza promotion event resulted in a $300 donation to the Sports Hall.

Thank you to The Barrel, and to all patrons who ordered a pizza during this time. Your support of the Norfolk County Sports Hall of Recognition is appreciated!

Want to sink your teeth into a tasty prize? Then why not take a shot at the Norfolk County Sports Hall of Recognition’s trivia contest?

The question: “Name three people who have been inducted into the Norfolk County Sports Hall of Recognition, along with the years they were inducted.”

If you can’t answer off the top of your head, don’t despair: The response can readily be found either by looking at the Sports Hall’s web site, or by checking out the Sports Hall’s 25th anniversary book, Norfolk County Sports Hall of Recognition: The First Twenty-Five Years.

How to submit:
Entries can be submitted as follows:

a) by email, sent to norfolkcountysportshall@gmail.com, or

Good luck to all!

Do you know of a Norfolk County athlete who has consistently excelled at the highest levels of sport? A coach or builder who has left a lasting stamp on Norfolk’s sporting landscape? A sports ambassador whose enthusiasm and commitment stands out above all others?

If so, the Norfolk County Sports Hall of Recognition wants to hear from you.

Individuals have until December 1, 2022 to submit nominations for the current round of inductions. Candidates will be assessed against a standard set of criteria to determine up to four inductees to be named as the Sports Hall’s Class of 2022. These inductees will be honoured, along with Class of 2023, at the Sports Hall’s next induction dinner, tentatively planned for 2024.

The nomination form can be downloaded from that location, or from the link below:

Completed nomination forms, along with supporting material, can be dropped off at the Simcoe Recreation Centre to the attention of Susie Wray, or mailed to the updated address indicated on the current nomination form.

Since its establishment in 1994, the Norfolk County Sports Hall of Recognition has inducted over 90 individuals from throughout the county, including hockey greats Leonard “Red” Kelly and Ron “Chico” Maki as well as numerous builders and coaches without whose efforts the Norfolk sports landscape would look very different. The Sports Hall displays are located in the pool viewing area of the Simcoe Recreation Centre. The “ Hall” includes a permanent plaque wall as well as rotating displays featuring the most recent inductees.

The Sports Hall has also conducted Reunion of Champions events to recognize past provincial and national championship teams, as well as supporting the Parade of Champions, which this year acknowledged over 100 individuals who, as members of teams or on their own, earned provincial, national, or international honours since the fall of 2019.

You can support the Norfolk County Sports Hall of Recognition just by eating pizza!

Each year, Norfolk County and the Norfolk County Sports Hall of Recognition partner to recognize individuals and teams who have won provincial, national, or international sports championships. If you meet this qualification, or know an individual or a team that does, please contact Lisa Girard at lisa.girard@norfolkcounty.ca, so we can include them in the next Parade of Champions event in October, 2022.  Due to COVID-19 we were unable to hold Parade of Champions events in 2020 and 2021, so this event will include individuals and teams who earned championships since our last recognition event in October 2019.

Due to low registration, the Norfolk County Sports Hall of Recognition Board made the difficult decision to cancel the golf tournament scheduled for August, 2022, with the intention of trying again next year.

We apologize for any inconvenience this decision may have caused interested golfers and sponsors, and look forward to hosting a successful event in 2023.

Tickets for this year’s Norfolk County Sports Hall of Recognition Induction Dinner are now available for purchase at the Simcoe Recreation Centre, or by contacting Heather King. Information is included in the poster below: 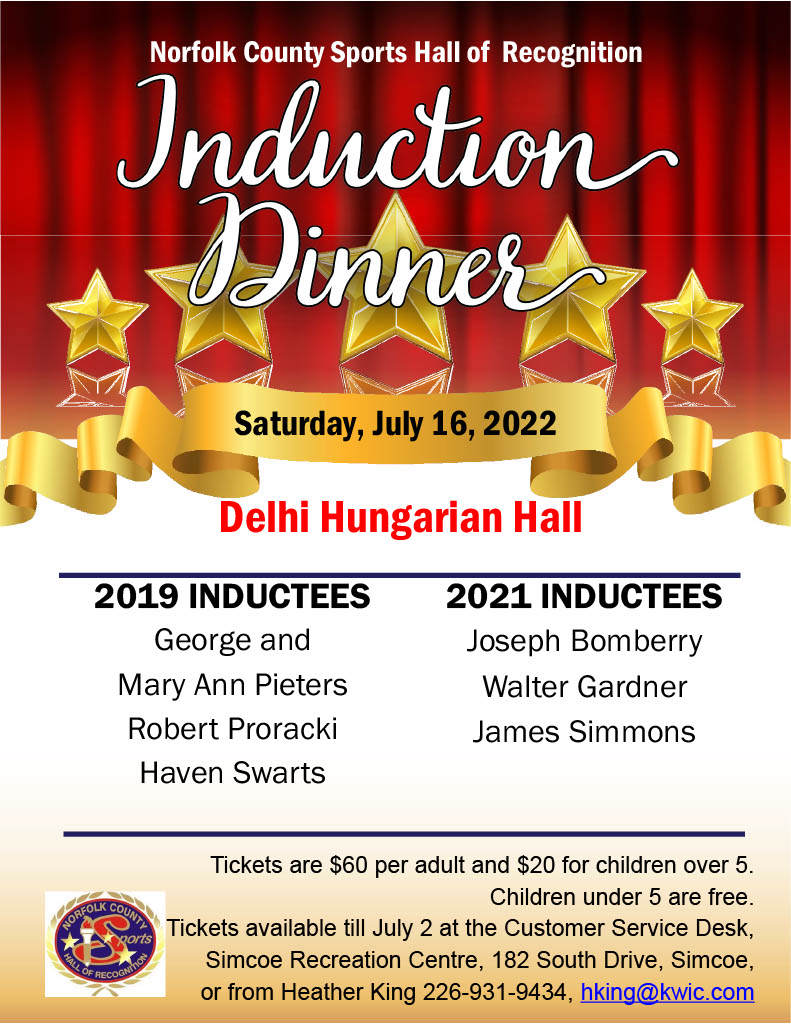 The Norfolk County Sports Hall of Recognition is proud to announce its Class of 2021. Joining the group of athletes, coaches, and builders already elected is the trio of Joseph “Joey” Bomberry, James “Jim” Simmons, and Walter “Walt” Gardner.

The class of 2021 will join the nominees from 2019, George and Mary Ann Pieters (archery club builders and competitors), Robert Proracki (athlete and official in a variety of sports) and Haven Swarts (gymnastics).

All will be inducted at the Norfolk County Sports Hall of Recognition Dinner on July 16, 2022 at the Hungarian Hall, Delhi, Ontario.  Due to the global pandemic, inductees were not selected for 2020.

Joey Bomberry
Known for his infectious smile, friendly demeanor and passion for life, you’d be hard pressed to find a more well-liked Norfolk County resident than Joey Bomberry. Bomberry became affectionately known as a “rink rat” in the early 60s, assisting local minor hockey and junior teams with sticks, water bottles and any other task that needed to be done.

He was a constant fixture at the rink, and also the baseball fields in the region, both lending a hand and offering words of encouragement to all participants. Bomberry was also a passionate supporter of local firefighters, often helping out when asked and even going on a few calls to assist.

“Joey was an institution,” says Sports Hall inductee and past chair Don Stewart. “Everyone who knew him loved him.”  Bomberry spent hundreds of hours assisting local teams, coaches and players, so much so that the Sports Hall will include Bomberry as its first-ever ‘Sports Ambassador’.

Sports Ambassadors are spokespersons, boosters, and/or personalities that exemplify everything about the game, sportsmanship, rallying for the cause and showing dedication and love for sport in our area. They are beyond passionate about their favourite athletic endeavours and their community, even though they may not be official members of a certain team.

Jim Simmons
Jim Simmons was a rink rat growing up in his hometown of Port Dover. It was then that he developed a passion for hockey and competition. This passion would eventually be showcased at the highest levels years later. He had a strong career on the field, winning multiple slo pitch titles. Simmons became just the third pitcher to toss a no-hitter in a provincial tournament in 1988. On the ice he won multiple championships at the Simcoe Curling Club.

At the age of 65, Simmons was diagnosed with macular degeneration but refused to let a lack of sight slow him down. Playing mostly with a local rink that includes fellow Sports Hall member Mike Vrooman, Simmons won four national championships and two provincial titles. In the summer, he turned his attention to the links where he became the Ontario Vision Impaired Golf senior men’s champion three-straight times from 2011-2013. But that’s not all. Simmons competes for the Port Dover Sailing Club and, among other titles, won Boat of the Year, and the Port Colborne to Port Dover Race in 2018.

“Jim always played the game with honesty,” said Simmons’ slo pitch teammate, fellow Sports Hall inductee, and former Norfolk County Mayor Charlie Luke. “He supported all his team members at all times both on and off the diamond.”

Walt Gardner
Walt Gardner excelled at various levels of hockey, baseball/fastball, coaching and as an official. He won a total of 11 championships as a player and coach with teams at many levels, including with the Montreal Royals (Junior A), Simcoe Gunners, and Simcoe Intermediate Fastball.

Gardner excelled on the ice enough to warrant an invitation to Chicago Black Hawks training camp at a time when the National Hockey League boasted only six teams and precious few roster spots. Gardner traded his stick for a whistle after his playing days were over and he would eventually spend 13 years as one of the best and most well-respected officials in the Ontario Hockey Association. His time in stripes included the 1975-76 season in the North American Hockey League.

“Both teams knew that if Walt was refereeing, the outcome was due to the players input rather than the decisions of the referee,” said Tony Steyaert, a former OHA official and supervisor. “ I just want to say for all his skills and efforts he put on the ice, he was a good person and has been a lifetime friend to me and others.”

The Norfolk County Sports Hall of Recognition is located in the Simcoe Recreation Centre, pool viewing area level. Displays of sports team photos and inductee plaques can be viewed during regular operating hours.  Additional information about events, past inductees and how to nominate individuals can be found on elsewhere on our website, www.norfolksports.ca.

March 21, 2023, 5 p.m.: Tentative date for Sports Hall AGM. Stay tuned for details. Anyone interested in joining the Board is welcome to contact us at norfolkcountysportshall@gmail.com for details.