The Barrel’s Pizza Promotion event resulted in a $300 donation to the Sports Hall. Many thanks to The Barrel, and to all those who supported this event.

Many thanks to The Barrel Restaurant for their Pizza Promotion. The Barrel pledged to donate $2 to the Sports Hall for every medium and large traditional or gourmet pizza ordered for pickup or delivery from November 7 to 13.

The pizza promotion event resulted in a $300 donation to the Sports Hall.

Thank you to The Barrel, and to all patrons who ordered a pizza during this time. Your support of the Norfolk County Sports Hall of Recognition is appreciated!

Want to sink your teeth into a tasty prize? Then why not take a shot at the Norfolk County Sports Hall of Recognition’s trivia contest?

The question: “Name three people who have been inducted into the Norfolk County Sports Hall of Recognition, along with the years they were inducted.”

If you can’t answer off the top of your head, don’t despair: The response can readily be found either by looking at the Sports Hall’s web site, or by checking out the Sports Hall’s 25th anniversary book, Norfolk County Sports Hall of Recognition: The First Twenty-Five Years.

How to submit:
Entries can be submitted as follows:

a) by email, sent to norfolkcountysportshall@gmail.com, or

Good luck to all!

Do you know of a Norfolk County athlete who has consistently excelled at the highest levels of sport? A coach or builder who has left a lasting stamp on Norfolk’s sporting landscape? A sports ambassador whose enthusiasm and commitment stands out above all others?

If so, the Norfolk County Sports Hall of Recognition wants to hear from you.

Individuals have until December 1, 2022 to submit nominations for the current round of inductions. Candidates will be assessed against a standard set of criteria to determine up to four inductees to be named as the Sports Hall’s Class of 2022. These inductees will be honoured, along with Class of 2023, at the Sports Hall’s next induction dinner, tentatively planned for 2024.

The nomination form can be downloaded from that location, or from the link below:

Completed nomination forms, along with supporting material, can be dropped off at the Simcoe Recreation Centre to the attention of Susie Wray, or mailed to the updated address indicated on the current nomination form.

Since its establishment in 1994, the Norfolk County Sports Hall of Recognition has inducted over 90 individuals from throughout the county, including hockey greats Leonard “Red” Kelly and Ron “Chico” Maki as well as numerous builders and coaches without whose efforts the Norfolk sports landscape would look very different. The Sports Hall displays are located in the pool viewing area of the Simcoe Recreation Centre. The “ Hall” includes a permanent plaque wall as well as rotating displays featuring the most recent inductees.

The Sports Hall has also conducted Reunion of Champions events to recognize past provincial and national championship teams, as well as supporting the Parade of Champions, which this year acknowledged over 100 individuals who, as members of teams or on their own, earned provincial, national, or international honours since the fall of 2019. 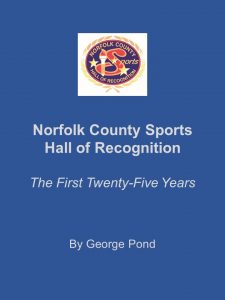 Norfolk County Sports Hall of Recognition: The First Twenty-Five Years is now available for purchase as an e-book. A print version of this book, written by George Pond, was launched as part of the Sports Hall’s 25th anniversary celebrations.

The e-book version contains essentially the same written content as the print version. To better suit the e-book format, some of the photos in the print version have been removed. However, the e-book still contains photos of each individual inductee, as well as a photo of each of the 11 teams inducted into the Sports Hall as well as other photos.

Cost of the e-book is $14.99 Canadian. Copies can be purchased through Kobo.com, using the link below:

David Baldock, the late Paul Davidson, David Edmonds, Jim Merrick and Peter Timpf have all been named to the Norfolk County Sports Hall of Recognition for 2018. These outstanding athletes, coaches and builders are being recognized for their contribution to the rich sports history of Norfolk County.

Long-time Simcoe resident, David Baldock has excelled in the international sport of orienteering. This athletic endeavour combines racing and navigation with a compass through diverse and often unfamiliar terrain. Baldock has medalled in events held throughout North America and is a Canadian and Provincial champion. Locally, he helped to establish orienteering courses and enrichment programs for children in senior public school.

During his lifetime, Paul Davidson competed, coached and organized many sports with compassion. He  won championships in basketball, lacrosse, hockey, and curling but is most widely recognized for being part of the mixed pairs National and Provincial lawn bowling championships, with partner Muriel LaPlante. Paul was a well-respected coach at the Delhi Public and Simcoe Composite Schools. Davidson also served as a sight coach/guide for blind golfers and curlers at the Provincial and National level.

David Edmonds is being recognized as a dedicated builder and coach of hockey, soccer and baseball in the communities of Delhi, Simcoe and Tillsonburg for over 50 years. Whether Dave was on an executive, coaching from the sidelines or officiating in some capacity, he tried to provide the best opportunity he could for all participants. Former athletes Edmonds has coached describe him as an outstanding leader who instilled the values of hard work and sportsmanship. Dave made the game fun and encouraged all to perform their best.

Jim Merrick is passionate about football! After getting his start as a high school football player at Simcoe Composite School, Jim trained hard to make the line-up with McGill University and the CFL, with stints in Saskatchewan and Hamilton. Along the way to the big league, he also excelled in the shot put event, winning a provincial university championship and competing at the Canadian National level. Back home in Norfolk County, Jim continues to lead young football players to great destinies. The most well-known player he has assisted with coaching is two-time Grey Cup Champion Shane Bergman.

Port Dover resident Peter Timpf is being recognized as a builder of sport for the lakeside community. For more than 30 years, Peter has served on executives, coached, and spearheaded fundraising and membership drives for the Port Dover Figure Skating Club, Port Dover Minor Softball Association and the Ontario Rural Softball Association (ORSA). He has successfully coached two female teams to ORSA provincial championships and another to an Eastern Canadian Championship. Many credit Peter for serving as a mentor who inspires them to volunteer with sport and service club organizations in the community.

These outstanding athletes, coaches and builders along with the 2017 inductees will be inducted into the Norfolk County Sports Hall of Recognition at a gala celebration on July 13, 2019.

March 21, 2023, 5 p.m.: Tentative date for Sports Hall AGM. Stay tuned for details. Anyone interested in joining the Board is welcome to contact us at norfolkcountysportshall@gmail.com for details.